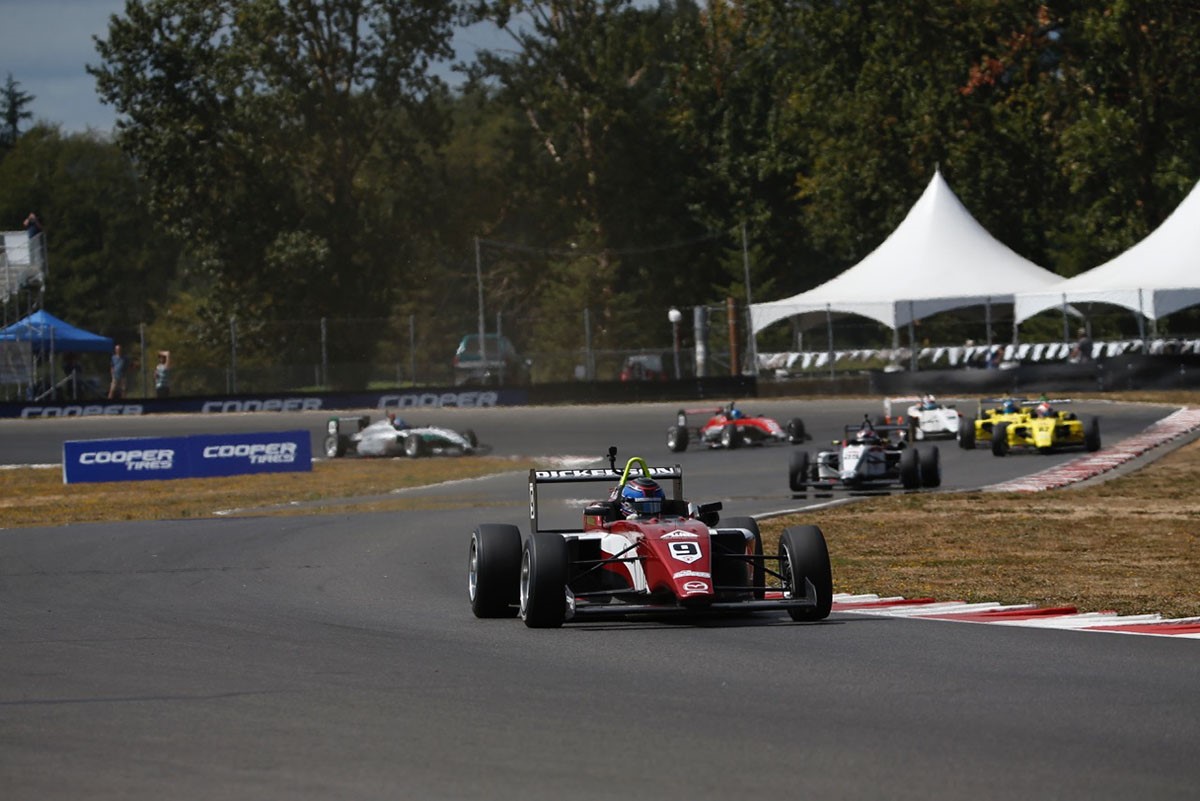 Travelling across the country to Portland, Oregon, ArmsUp Motorsports entered Dakota Dickerson and Max Peichel in the final event of the 2018 Cooper Tires USF2000 Championship Presented by Mazda. Taking place at the Portland International Raceway alongside the Verizon IndyCar Series and with the entire Road to Indy program, ArmsUp Motorsports drivers showed progression throughout the weekend scoring their best results in the second and final race on Sunday.

"Portland is a bad fast race track and it takes some getting use to," explained ArmsUp Motorsports Gregg Borland. "Both Dakota and Max progressed nicely throughout the weekend and even though we had a few hiccups, continued their upward trend. It was great to see the team never give up which really shows the character of not only our drivers, but our crew as well."

With practice complete on Friday morning, two qualifying sessions were next on the schedule for Dickerson and Peichel to set the grid for both wheel-to-wheel events on the weekend. Friday's session saw Dickerson claim the 13th quickest lap time while Peichel was involved in a single car incident early in the session and would be forced to start race one from the tail of the field. In the second qualifying session on the weekend, both drivers ratcheted up the order slightly with Dickerson claiming the 11th quickest lap of the session and Peichel in 17th.

Borland continued, "When we got to the racing portion of the weekend, our drivers were flawless and took advantage of each and every situation they could. Both completed every race lap, brought the car home in one piece and scored points in both events all while gaining valuable experience for their future racing careers. I was especially proud of Max, who was disappointed with his results, but shows great potential for the amount of seat time that he has compared to others in the series."

Dickerson gained five positions in race one while Peichel was close behind in number of positions gained with four as they finished eighth and 14th respectively. In race two, the pair of ArmsUp pilots reversed roles as Peichel gained five positions to finish 12th and Dickerson advanced forward four spots to end his weekend with a seventh place finish.

Borland added, "It was a good way to finish the year and now we will shift our focus to 2019 and several other programs that we operate at ArmsUp Motorsports. I want to personally thank Mazda Motorsports, John Doonan and Kyle Kimball for all they have done for the careers of young drivers. Mazda has been an outstanding partner in the Road to Indy and have set the bar high for the future partners of the series."

Following the Portland Grand Prix, ArmsUp Motorsports will return to their Sheboygan Falls, Wisconsin shop and begin preparations for the annual Chris Griffis Test and 2019 racing season. Taking place over the September 22-23 weekend, ArmsUp Motorsports has openings for two drivers to participate in the multi-session test on the road course of the Indianapolis Motor Speedway.